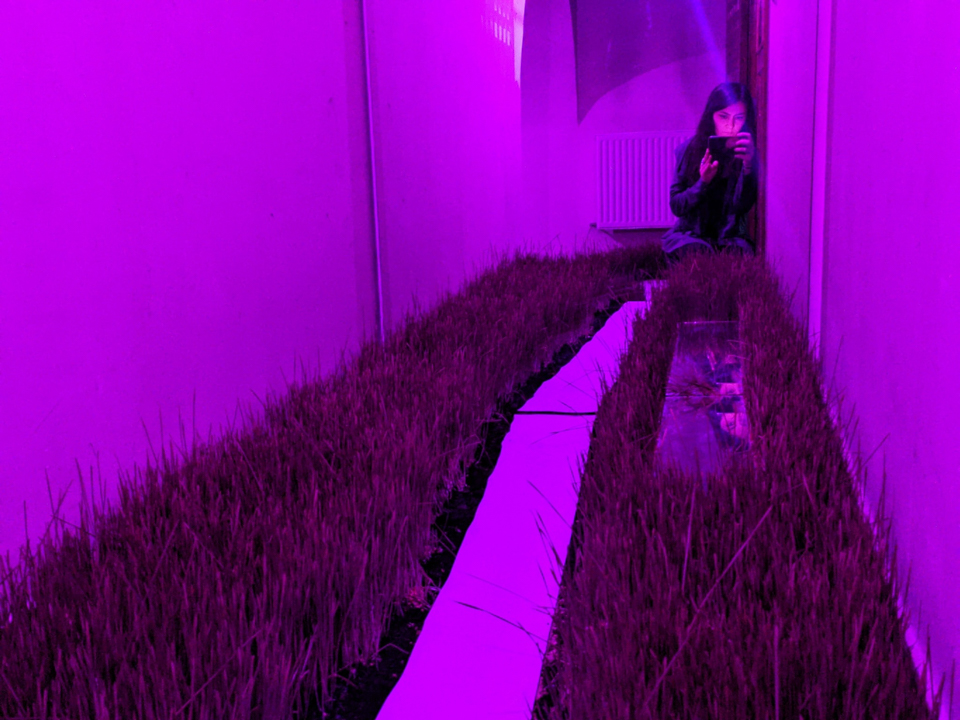 Artists Mălina Ionescu and Andreea Medar return to the joint project VIAE FERRAE after a year and a half, once again approaching the concept of reconfigured space via compression and overlap. Inspired by China Miéville’s short story, Reports of Certain Events in London, in which the streets become characters and go experience unexpected emotional experiences, in December 2019 the two artists built an oversized map in which the streets describe an intimate route to significant places from their personal lives. The project was an attempt to represent a geographical space, which corresponds, in fact, to an affective reality – a memory space. But why the need or necessity to return to this project and to represent the space once more?

After an acute period of immobility, of exchanging interpersonal relationships and rethinking one’s self, the mapping of the important places in the artists’ lives represents a forced revival of memory, an attempt to keep the past alive. The map, shrouded in nostalgia, unifies both previous emotional experiences and the mental projections which act upon them, while the transformation of the self over time is illustrated by the various modes of space representation. Physical and political geography fades and takes the form of an affective reality, of the intimate way in which the artists relate to their own journey. The places which hold greater significance are reproduced in larger sizes, thus encapsulating a more intense emotional load.

In his book The Poetics of Space, French philosopher Gaston Bachelard explores how people experience the intimacy of a space or their own intimacy in a certain place, often referring to his own home and the concept of “home”. Man’s relationship with the spaces he inhabits, activates or experiences is visceral and extremely intimate; these spaces, in turn, become impregnated by the stories, bringing them to life. Bachelard specifically talks about diluting a concrete physical structure and filling it with personal thoughts, emotions and dreams. He states at one point that the living space transcends geometric constructions, and that the house is, in fact, the topography of its own intimacy. Thus, Andreea and Mălina build a map that describes a disfigured reality, yet a deeply intimate one.

Compared to the first map, built in an empty commercial space in Târgu Jiu, VIAE FERRAE # 2 is enriched with new layers and dimensions. Once again in Târgu Jiu, but this time in the basement of the Constantin Brâncuși National Museum, the artists had to introduce a new artificial element, which intrinsically extended and augmented the curatorial discourse. To stimulate the growth of wheat in the interstices between the streets and the places on the map, the artists made up for the lack of natural light in the basement with red lights – an artificial light needed for the growth of a natural element. The two concepts, natural and artificial, are no longer in opposition, they are no longer elements of the same dichotomy, but complement each other and become a whole.

The newly created space, bathed in a pink light, also creates the illusion of a game, of an intensely virtualized reality. Thus, the new configured dimension breaks the boundaries between the virtual and real through light that alters and transfigures shapes and colors. Just as the artists’ map represents a distorted reality of tangible physical truths, so does the fusion of natural green and artificial red alter the perception of the outside world at the margins of this diffuse labyrinth. The virtual space and the game of perception are further articulated through the live projection of the images in the gallery. Visitors could directly confront their own infinitely multiplied reflection, unfolding a plurality of reality before their eyes.

Another way in which visitors were engaged in a game with themselves was the insertion of several mirrors into the space (an element that was not present in the first VIAE FERRAE), which played a double role. The first focused on the actual reflection of the visitors, reminiscent of The Abstract Cabinet, built in 1927 by El Lissitzky and Alexander Dorner. They proposed a new type of exhibition architecture, building a space which, when viewed from a fixed point, gave a static impression, but when seen in motion, it took the form of a dynamic, flickering spectacle, activated by the viewer. Installing a mirror in the cabinet served to raise awareness to the viewer’s position in space and the various possibilities of relating to it. Dorner and Lissitzky’s Abstract Cabinet attempted to offer a novel and highly intimate and conscious experience of space. In a similar way, Mălina Ionescu and Andreea Medar expand the notion of space and dilute any boundaries between virtual and real or natural and artificial. Moreover, the randomly installed mirrors create the atmosphere of a deeper immersion, all while seemingly expanding the space to infinity and creating, in fact, space where there is none. Although they create a mimetic illusion of the world, mirrors suggest its spatialization in endless dimensions, thus multiplying the very layers of existence.

Reminiscing and revisiting beloved places implies an awareness of the new identity acquired over time and the discovery of a reality defined by relationships, interactions and emotional experiences, thus activating multiple layers of meaning. Through this immersive installation of total intimacy, Andreea and Mălina undertake a poetic exploration of their own emotional, intangible journey, which they attempt to materialize and establish in physical terms. The oversized map is a consistent collection of meaningful places that the artists can only carry in their hearts and minds, thus emphasizing the need for belonging and the inability to part with loved ones or memories.